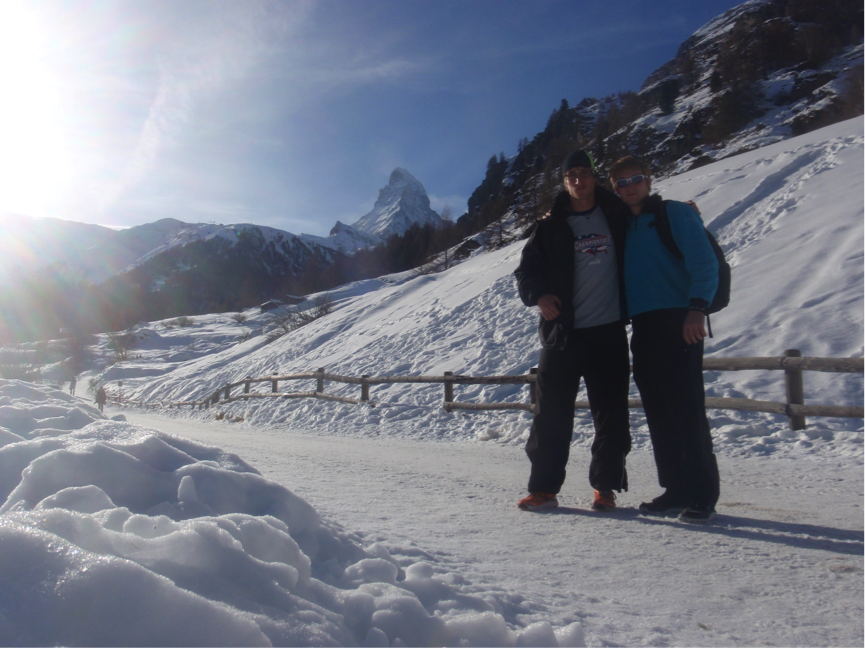 Cameron and I in the Swiss Alps with the Matterhorn in the background.

What does it mean to be a dirtbag?

I guess for me a Dirtbag Runner (DR) is someone who enjoys the great outdoors more than the overcrowded indoors; whether that be physically inside a building, or figuratively inside a “human zoo/city” is irrelevant. Personally I love the outdoors, and running. Sleeping out in the middle of nowhere with a campfire and some good friends, sharing in some deep conversations is invariably more fun than doing big nights out in a city (although there is also a time and a place for that)!

I imagine being a full time Dirtbag is to be the zenith of living; having shed the beliefs of modern society to live a simpler, freer mode of life. Although I am not yet at that stage, I one day hope to experience it in all its glory.

What inspires you to run?

I have always been active and was a keen sportsman growing up and in school. After finishing university (in SC, USA where I was on a golf scholarship) I was looking for a new challenge. To cut a long story short I plumped for running and was sold on competing in ultra distance events.

The things that inspire me to run are wide and varied; being in the outdoors, exploring new places, running familiar routes and chasing down CRs on Strava, shooting for PRs during races, exerting energy and pushing myself physically, and overcoming mental hurdles. I would say the coolest thing about running though is the people you meet.

Having played a variety of sports growing up (both team and individual pursuits) the type of person I’ve met in ultra running is unique. The biggest thing I see (or don’t as the case may be) is the lack of egos, everyone who runs trails and ultras has a distinct humbleness about them. They are quick to share stories, but not just meaningless small talk chitchat. Stories that bare part of the soul are commonplace, and people are open in sharing those things that make them tick. But even though they open up, these people don’t try and enforce their way of thinking on anyone, these people are a very accepting bunch. It is the humbleness and humility of Ultra runners combined with their strength of spirit that make them such a distinct and awesome bunch to spend time and space with. 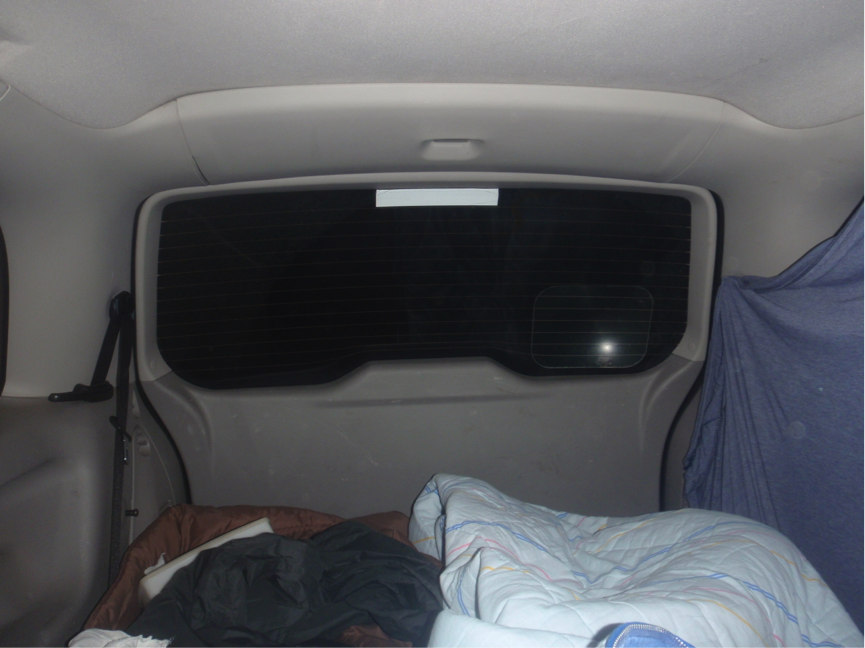 The aptly named “Zafira Suite”, our home for the trip.

What adventures have stood out in your life that solidified your beliefs about living minimally, traveling and exploring?

My best holiday to date was in January of 2011. Although at the time I was not a runner, and had never even heard of the Dirtbag lifestyle, it was a week of freedom and adventure.

I had recently graduated from university in December of 2010 and had moved all my stuff back home to Jersey from SC. A good friend of mine (Cameron Dorn, check out his adventures at (www.suitcaseofcourage.net)) from university was completing his Masters in the UK, and being from the US he went home for thanksgiving and as such was spending Christmas this side of the pond. He came over to Jersey for (something like) 11 days, 7 of which we spent off island. Cameron is a passionate adventurer and as such we decided we would take (with her permission) my Mum’s Vauxhall Zafira (a minivan/SUV cross over type of car) on the ferry to France and travel though Europe for a week. In an effort to keep costs as low as possible we would be sleeping in the car. We put the back seats flat down and threw a couple of thin rollup camping mattresses in there along with various supplies, changes of clothes, etc.

In order to keep things short and sweet here we managed to rack up approximately 2,300 miles in 7 days. We started in St. Malo (the main French Port that sails to Jersey) heading down through France to Chamonix where we explored the mountains and Mont Blanc for a while before continuing on through the Alps to Milan. From there we decided to head north to Zermatt to check out the Matterhorn and get some more time hiking in the mountains. After that it was further north to Luxembourg and into the Ardennes forest where we stayed in the famed (WW2) town of Bastogne. After there we headed further north to Arnhem visiting the British Parachute Regiment’s museum “Hartenstein” and then on to Amsterdam for our solo night out on town and a shower/proper bed in a hostel. From there it was south to Waterloo in Belgium (the site of the famous battle where Wellington defeated Napoleon). Continuing south we went through the fields of Flanders to the Normandy landing beaches and the American War Cemetery at Omaha Beach. From there it was a quick trip across the Normandy peninsular and back on the ferry in St. Malo (see below for photos).

We did the majority of our driving in the early morning and evening after dark so we could maximise daylight in our stops of choice, a tactic that worked well even if it did leave us a little tired. Thinking of doing the same (or similar) again gets just about every cell in my body excited, especially as now being a runner it would open up a whole new world of exploration, especially in the mountains.

It was an amazing experience to be so free to travel wherever we wanted every day with no limits apart from the miles to drive. Looking back now as a Dirtbag, I can say that was a eureka moment, I knew I loved that type of lifestyle. I’m not sure why I’m like this but I can see the same personality traits in other members of my family. My surname is “de Gruchy” which is local to the island of Jersey, and we are lucky enough to be able to trace our direct family lineage back to the 1300’s and indirectly back further to pre 1066. Along the way there have been a huge variety of characters, some that stood out to me were a cohort of fishermen living life during the 1800’s. They sailed back and forth across the Atlantic to fish for Cod in the waters around Newfoundland. After catching it they would dry the fish before returning to Jersey and the UK where they would sell their goods.

I like to think I got my sense of adventure and need to travel from these folk (I think it was my 5th great grandfather and other generations around that time), but maybe it’s just me who is a bit weird (something I’m very OK with)! 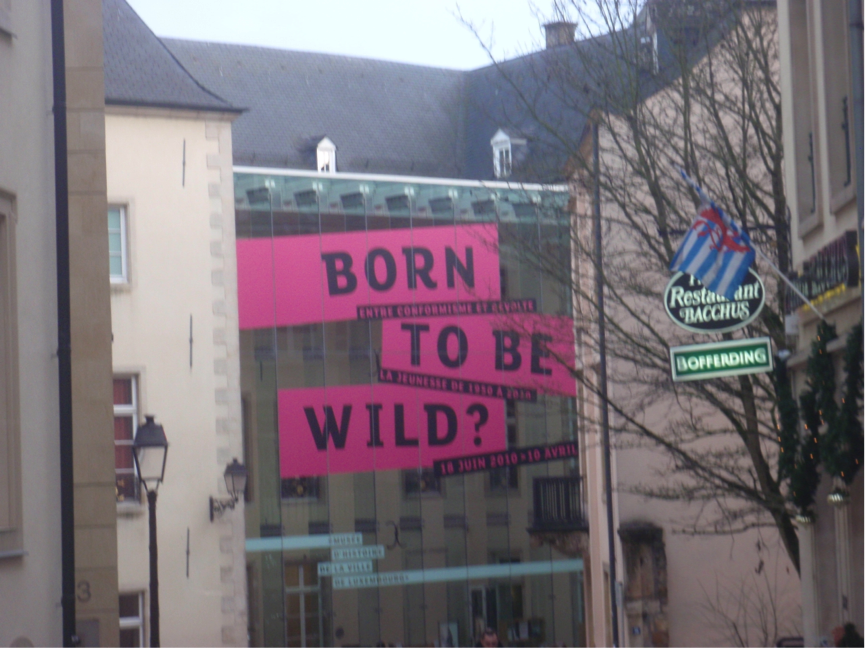 An ironic sign in an art gallery we saw whilst in Luxembourg City.

What would you like to share with the world about why you chose to join Dirtbag Runners and represent this movement?

I chose to join the DR community because I feel like it represents a philosophy of living that I hold close to my core being, and I enjoy being around and conversing with people who share those same values.

I don’t really know why I wanted to represent DRs. I guess when I sent in my application I figured it would get the red rubber “X” stamp as my job/career is almost polar opposite to the Dirtbag norm (I am a Chartered Accountant/CPA who works for one of the “Big 4”, a very normal and regimented experience), but I wanted to show that Dirtbags come in all shapes and sizes, and even professions. I guess I also wanted to be an ambassador so I could contribute to something that speaks to my soul as there is something very fulfilling about doing that.