My eight months of preparation rounded off with a perfect final week. Three short gentle runs felt effortless, and by Friday, I was feeling ready to take on my first 100k: The North Face 100k in Australia. 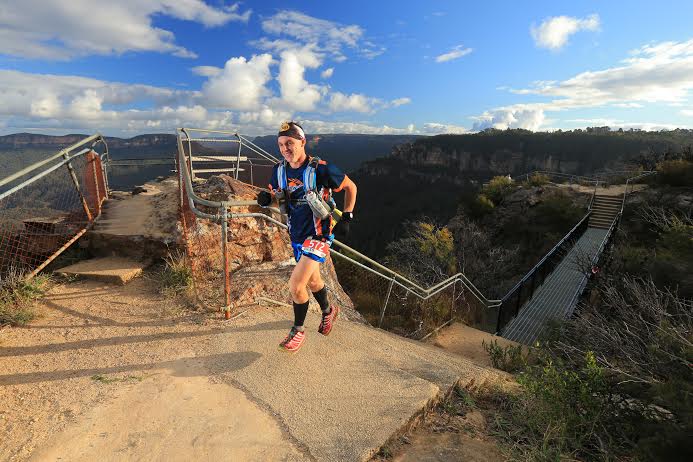 I had received news during the week that two great friends, Kev & Val, were coming down to support. We flew down to Sydney on Friday morning, and made the one and a half hour drive west to Katoomba. As we got closer, it became apparent how beautiful the landscape was, and also, how tough it would make the run.

Within minutes of being in the hotel room, I had my gear covering the small room, as I sorted my food, drink, spare clothes, and medical needs into drop bags, before deciding only to use one and rely upon Kirsty to carry everything with her. This seemed the easier option as I was struggling to focus on the job in hand.

After a very entertaining runners’ briefing, we headed back to the hotel, packed my pack for the morning, and fell asleep. I woke up feeling good, and had only woken once during the night.

We made the short drive to Scenic World after a brekky of one Nutella sandwich, one mandarin, and a rice pudding.

I prepared myself as the atmosphere built with classic tracks and the count down to the start of the first wave. Soon, it was my turn to begin one of my biggest challenges. At this point I was feeling a lot more relaxed than I had expected to and quickly settled in to a steady rhythm.

My primary focus was to not go out too fast and destroy the race from the start. A four kilometer out and back on the road gave us time to spread out and have one last look at our friends and families before checkpoint three (46 kilometers), and where the support crews can start to assist.  Checkpoints one and two were self-supported. 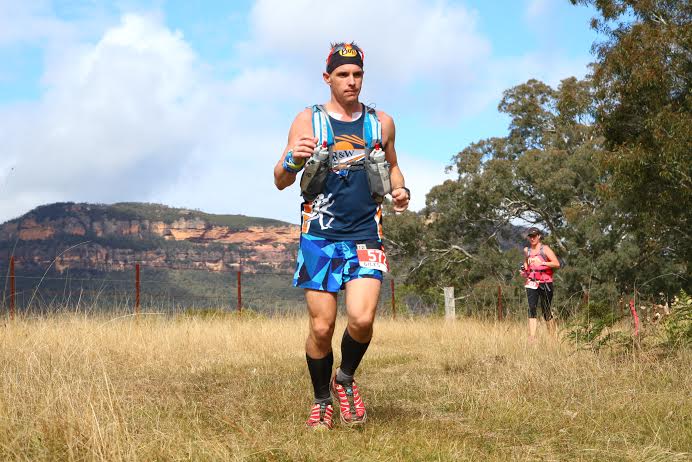 By the end of the road section, I was feeling settled and relaxed.

We all fell in to single file as we dropped down the Furber stairs. We started at around 950 meters above sea level descending around 150 meters with the knowledge that we would be coming back up for the last 500 meters of the race. The stairs were a mix of steel, rock, and concrete. Some of the stairs were very slippery. I had two small slips.

The next 5 kilometers were very technical, with heaps of rocks and boulders to climb over or between. We were still in single file with little room to pass. This made it slow going and good for conserving energy. Even this early on in the race the course was taking victims. I passed one guy with a broken leg, and multiple others with rolled ankles. I watched the runner in front of me slip on a rock so I slowed, and of course, slipped myself. I went down between the boulders, but apart from a couple of scrapes, was fine.

With around 1.5 kilometers to check point one (CP1), we hit the Golden Stairs. We climbed around 150m vertically with virtually no flats to rest. I managed to pass around 6 people on the way up which gave a small boost of confidence. Once at the top it was a climb of another 100m on an open fire break to CP1.

My theory was to keep my CP time under five minutes and surprised myself when it took me under two to refill my drink bottles with Skratchlab’s Hydration drink, grab some lollies, fruit, and have a quick toilet stop. On leaving (CP1) I was sitting in position 439 out of the 1000 entries. 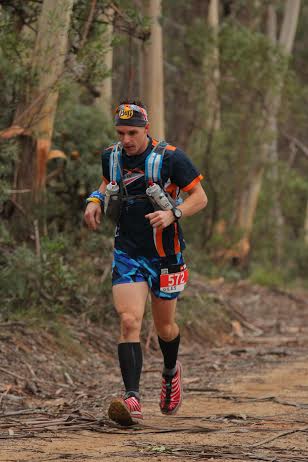 I had given myself two plans to work on, #1 = 17 hours which I felt was very achievable and #2 = 15 hours which might be possible. I had #1 as to not put too much pressure on myself and hopefully keep spirits high. On leaving (CP1) I was around 15 minutes ahead of #2 goal time.

I was still feeling good and not pushing too hard so decided to keep at the same pace.

With ultrarunning comes waves of highs and lows, and my first low usually hits around the 40kilometers mark. After that, who knows, I’ve only gone 50 so far. So there was a huge unknown ahead.

The next 20.5 kilometers were a bit of a blur. There were a lot of open fire trails, some short steep climbs and some very steep descents where ropes were used to help us down. I opted out of the famous Tarros ladders as there was a queue and opted for an extra 400 m, which I later found out saved me around 5 minutes.

It was starting to warm up and I was able to remove my gloves and one of the two T-shirts. The next 12 kilometers were either climbing so steeply that you couldn’t go straight up or descending with the same gradient. I luckily managed to stay upright as others fell around me. We ran along the top of IronPot Ridge with breathtaking views and didgeridoo’s played as we passed.

We hit (CP3) at 46 kilometers and felt the greatest emotional rush on seeing Kirsty, Kev, and Val. They had banners waving and short movies from the kids to watch. Not surprisingly, this stop took slightly longer, but I think still under the 5 min mark. The other thing to surprise me was how good I was feeling. No low had hit me, and I felt fresh. I found that I was consistently passing people on the climbs and found myself in position 383 on leaving (CP3).

It was only 11kilometers to the next CP but a climb of over 400m. I chatted to a somewhat local about our kids and general life, and turned what was a brutal hill into an enjoyable experience. Now heading in to (CP4) and 57 kilometers, I was still feeling fresh, and although my legs knew that they had been running, were fine. My ankles which would normally be giving me pain by now were also happy.

I also had to carry wet weather trousers, my fleece top, and high viz vest. These extra items made the pack heavy and more uncomfortable, but mandatory. I was up to position 322 on leaving (CP4) and around 45 minutes ahead of #2. 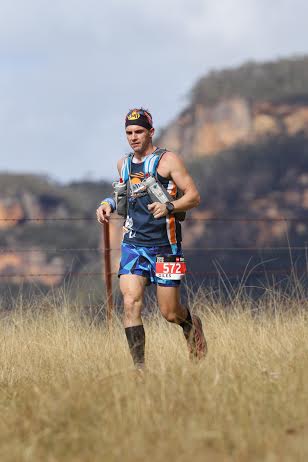 At this point the possibility of going under 14 hours started to enter my vision as long as nothing went wrong. But, of course, I have read and been told countless times to be prepared for changes in plans, and for things to go wrong.

It was dark now and getting colder. I relied on my head torch to see. It wasn’t until the next day that I learned to appreciate all of the night training over the last few months as I hadn’t noticed the dark to be a factor.

The next 22 kilometers were tough. It was either up or down stairs with little or no time to rest.

Just on the ups and downs; the accumulated time going up for the run was 8 hours 7 minutes. Going down was 6 hours exactly. and only 35 minutes running on the flat. Only 35 minutes out of the entire race on the flat is what made the course so BRUTAL, and for me, 6 hours going down did not work. I am happy going up and especially after this weekend feel that it is a strong point for me, but descending is not. During the time between (CP4) and (CP5) the inside of my left knee was hurting whenever I went down stairs and it was getting hard to bend. Luckily as soon as I was able to run on a short flat the pain went away.

I hit (CP5) and opted for cream to be rubbed in to the knee. I left (CP5) 900m above sea level and in 268th place but with my knee feeling far from good, the sub 14 hour finish was starting to slip away.

Over the next 8 kilometers, we dropped 700m which was not my idea of fun. When you’re like me, and not light on your feet on the downhill, every step throws a jarring feeling through the knees and quads. Luckily this only went on for about an hour.

With around 15kilometers to go there was only one way to get back to the start/finish at 950m above sea level, UP.

I can’t say that there was much enjoyment had over those last 15 Ks. Although as a whole I felt good, I couldn’t bend or use my left leg, and without the use of the handrails I would have struggled with the 900 odd steps up the Furber stairs. Getting to the top of the stairs and being told you have 200m to good is a feeling that I won’t get too often. Once running, the knee pain was gone and the atmosphere on crossing the line was like no other. I was quickly greeted by Kirsty, Kev and Val and later learned that I had come in 237th position out of 840 finishers in a time of 14:41:33. I found the whole experience quite overwhelming and was amazed to find out how many people had been tracking my progress. A truly amazing experience. 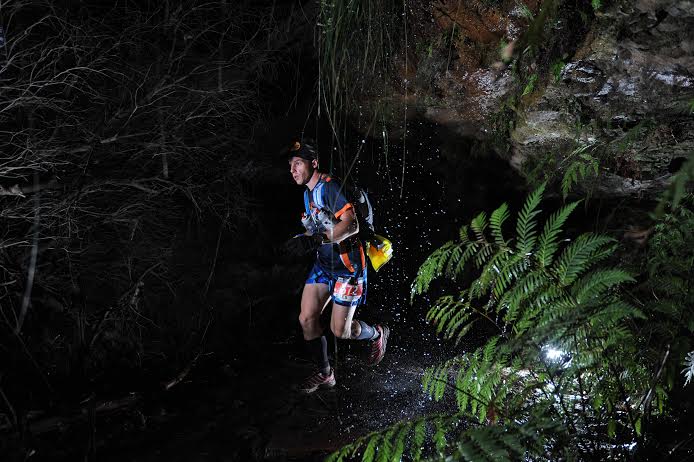