For nearly 80 years, the Ben Nevis Race in the Scottish Highlands has taken runners up & down the highest point in the British Isles. Our very own Dirtbag Runners Ambassador, Graham Kelly, completed the race this year (along with 10 other finishes!). He give us an account of the race:

The Ben Nevis Race has been run in its current form since 1937 but the history of hill running on Ben dates back to 1895 when William Swan, a hairdresser from Fort William, made the first recorded timed ascent up the mountain on or around 27th September of that year, running from the old post office in Fort William to the summit and back in 2 hours 41 minutes. It now takes place on the first Saturday in September every year, with a maximum of 600 competitors taking part on a first-come, first-served basis. It starts and finishes at the Claggan Park football ground on the outskirts of Fort William, and is 16 kilometres (9.9 miles) long with 1,340 metres (4,400 ft) of ascent. The course records have stood unbroken since 1984, when Kenny Stuart and Pauline Howarth of Keswick Athletics Club won the men’s and the women’s races with times of 1:25:34 and 1:43:25, respectively.

So what happened this year…

Keen to make an improvement on last year’s finish when I recorded my slowest time thanks to a broken ankle earlier in the year, I started fast with a view to getting in amongst folks who were better runners which would help push me up the gruelling ascent. The strategy worked to an extent in that I was in a faster group than I should have been but it also meant slipping places on the lower section was inevitable. Past the half way point I was able to regain a few slots as the endurance from earlier long races in the summer helped maintain a level of pace.

With the route being pretty much “out and back” one of my favourite aspects of the race is seeing the race leaders descending fast. Seven times race winner Finlay Wild was in his usual lead position with local lad Tom Owens not that far behind. Once on the summit, it was time to turn around and the start my own return towards the finish. It is often said that this is when the race really begins ! The initial boulder field is soon replaced with steep scree balancing on even steeper bedrock – choosing the best line is critical and keeping as much weight over the studs helps keep things on the vertical. Pace is less about ability and more about acceptance of risk. I was following ma pal Helen (again the strategy of sticking with a better runner was employed) as we approached the half way point on the descent where the route this year had been amended to prevent erosion on a particular section. Concentrating on not having an uncontrolled bounce down the mountain I finally looked up to see no sign of Helen …she must have been super bold and opened up a significant gap. About five minutes later I heard a shout from behind …it was Helen noting “went wrong fookin’ way” …once again she nipped past and I didn’t see her again until the finish line.

The last mile is along the tarmac and brutal on tired legs. Into the Claggan grounds and with one lap of the field, it was all over for another year.” 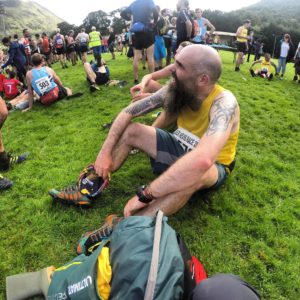 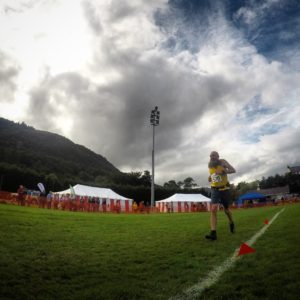 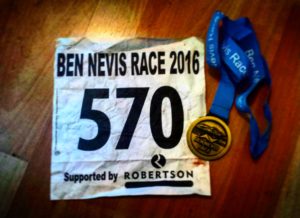 Ambassador Kyle Konczal journeyed up to Big Sky, Montana last weekend for a go at The Rut VK & 28k.

“The Sky Runner Series brings together world class MUT Runners. With world class talent, brings some of the toughest and gnarliest courses you could imagine! It’s amazing when you look around at the start line at the competition you will be sharing the trails with for the day, it’s an amazing feeling being in the mix doing what makes you and them seem crazy to the modern person, but what we love!

My entire trip to Big Sky for The Rut is an experience not to be forgotten: From the first morning waking up in the back of the Tacoma and running under the watchful eye of the Grand Tetons, to the bushwhacking adventures on the trails of Big Sky, to tackling the (slightly-shorter) VK and of course the beyond amazing, memorable run up and down Lone Peak Mountain during the 28k! The traverse up to the summit of Lone Peak left me having elevated fear, something that I have never experienced on the mountains. However, it was an experience and opportunity I look back on and say, “damn, that was fucking gnarly!” 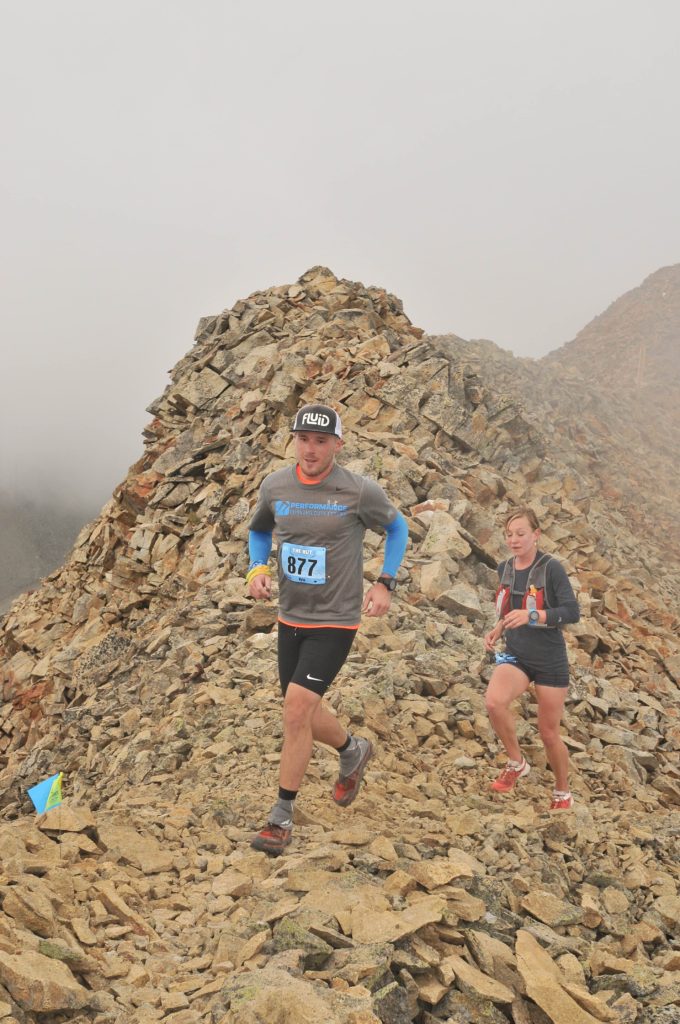 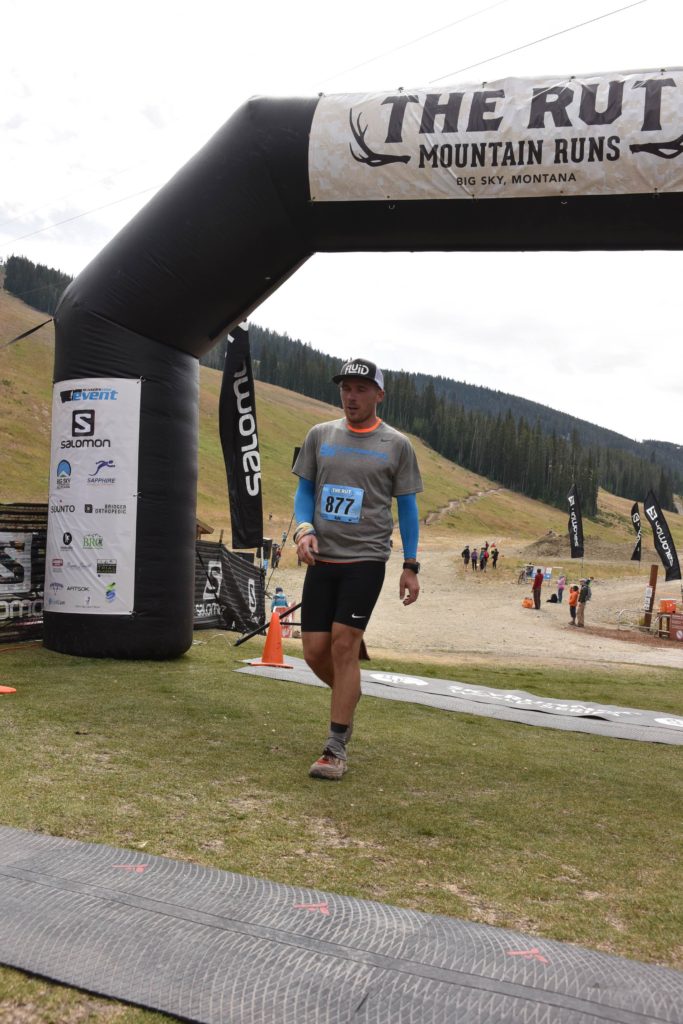 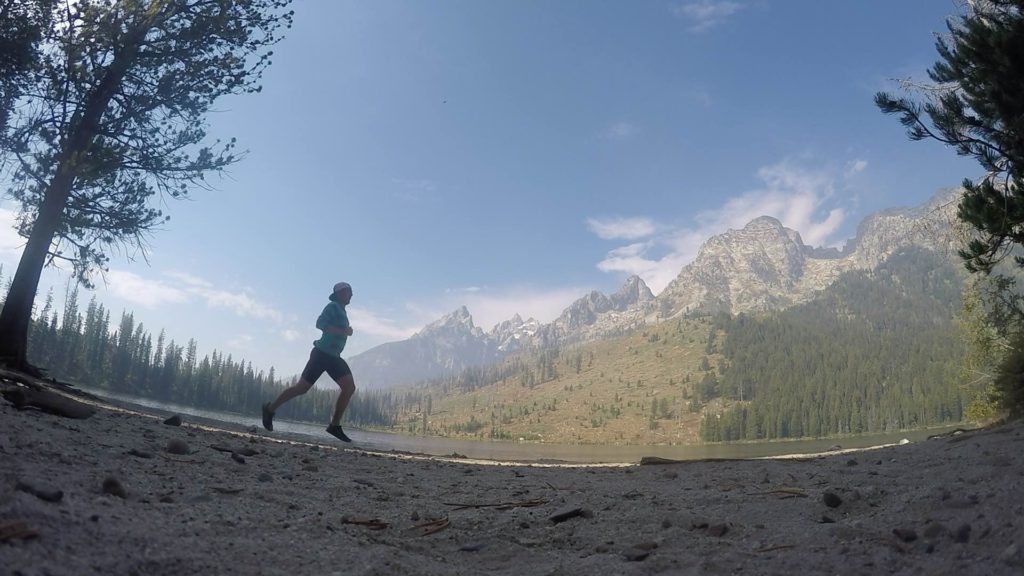 I normally don’t write anything about my own races, but The Rut is such an amazing event and deserves a bit more attention: In only it’s 4th year of existence, The Rut is truly a classic event. It draws people from all over the world and the only race I’ve attended where the atmosphere and energy surrounding the races is nearly tangible. This was my second year at The Rut. In 2015 I was ill-prepared for the 50k and struggled mightily! For this year’s race I signed up for both the 28k on Saturday & the 11k on Sunday. It may have been painful at times, but definitely worth the struggle to haul myself around and up Lone Peak. In fact, I enjoy this race so much that when there was an offer to get a free tattoo of The Rut logo (which also meant a free entry into next year’s event), I was on the list. Unfortunately, a lot of other’s were too & the artist ran out of time. Oh well, I’ll be happy to pay full price next year for the chance to make myself hurt at an event that is truly epic.

Last photo from an amazingly awesome weekend at The Rut: The finish line always looks good, but I have to say it's also a little bittersweet. Lots of time & sacrifice go into training for a race and it always seems to go by too fast…even when you're suffering and wondering why the hell you sign up for these races! ?: @sburke79 #rhtultratrail #trailrunning #trailrun #trailrunner #ultrarunners #ultrarunning #running #runner #trailandultra #worlderunners #fitspo #skyrunning #runitfast #montana #runnerland #wearetherunners #runtherut #runtagit #bigskyresort #runstagram #mountainrunning #runmontana #runhappy #dirtbagrunners #instarun #runshots #runspiration #skyrunner #instarunners 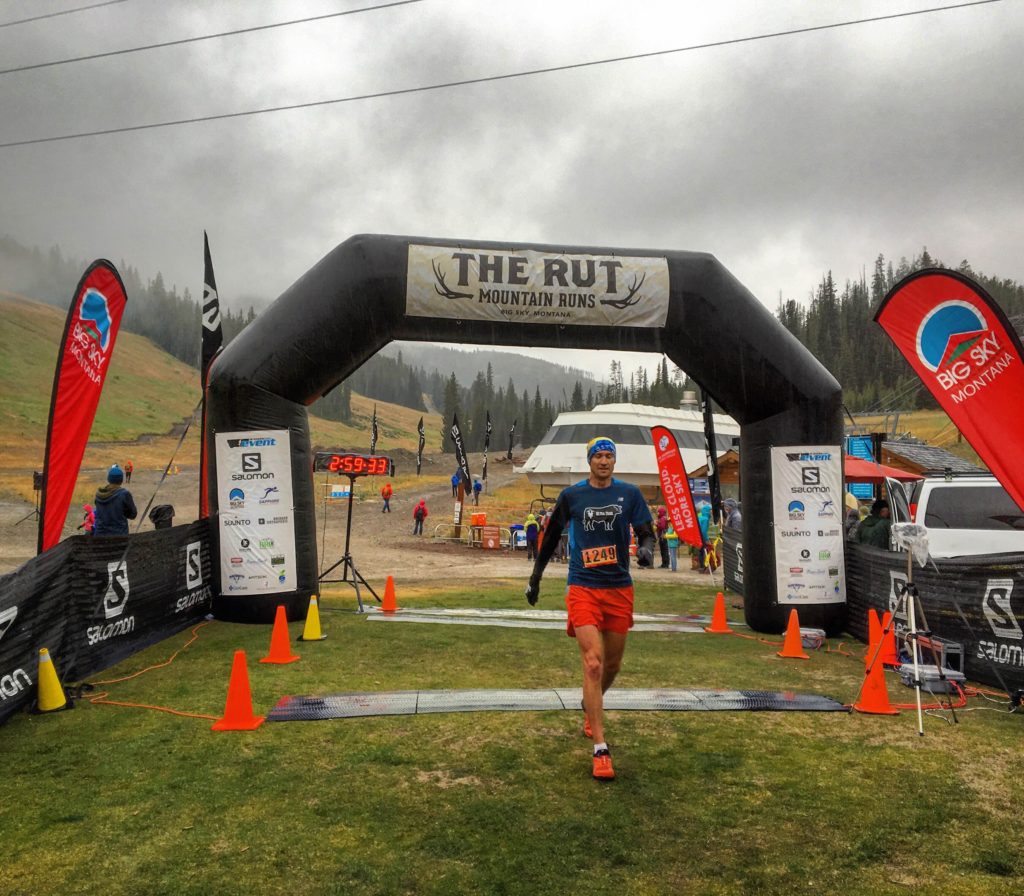 Some of my fellow Boise area Dirtbags finished their very first race at The Rut. Danielle Marquette and Eric Narad each ran the shortened version of the 50k (ended up being about 26.3 miles) and Sunny Narad took on the 28k. Danielle ran an awesome race and ended up 20th Female overall! Wow! With brutal conditions ranging from rain to hail and then big, wet flakes of snow, they each ran outstanding races and enjoyed their time in Big Sky! Plus their kiddos kicked some butt at the Runt Run! Seriously, more races should have a kids race, they absolutely loved it! 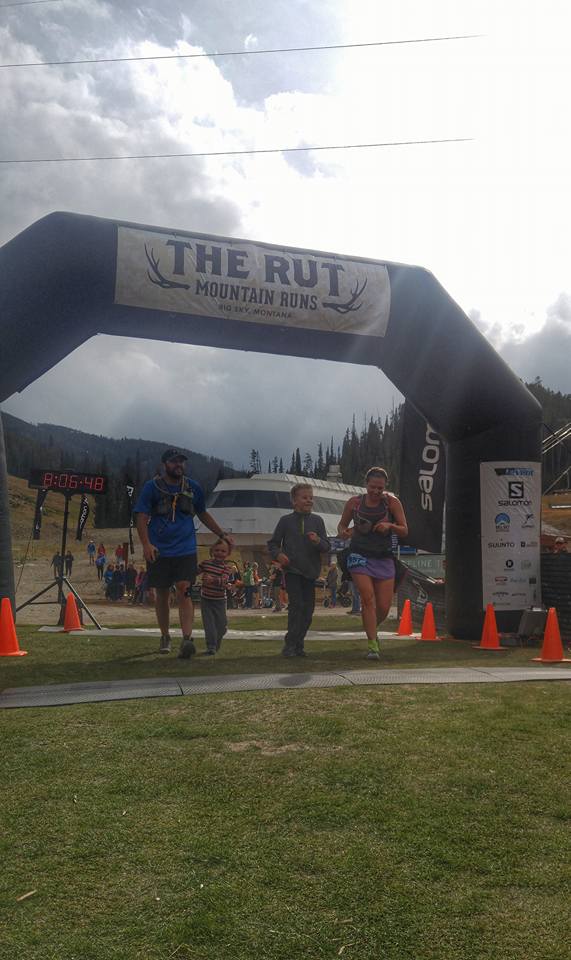 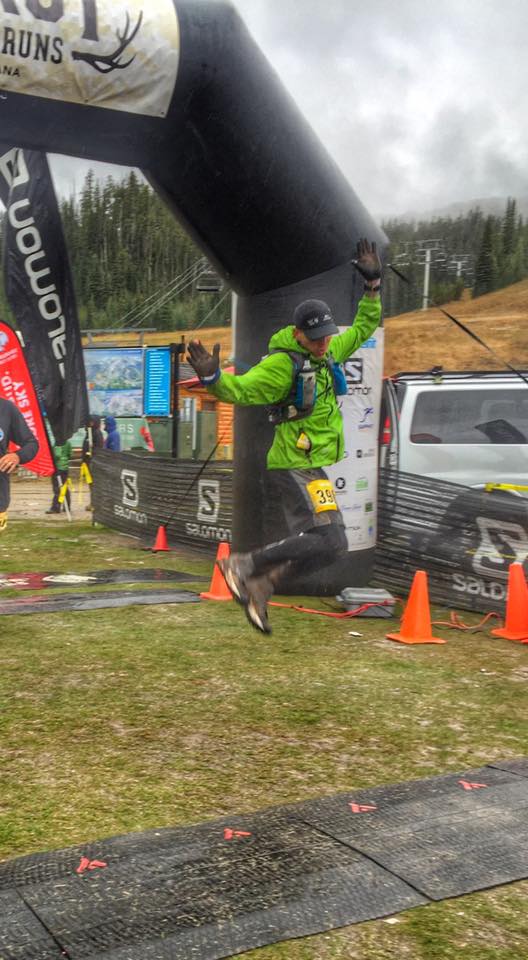 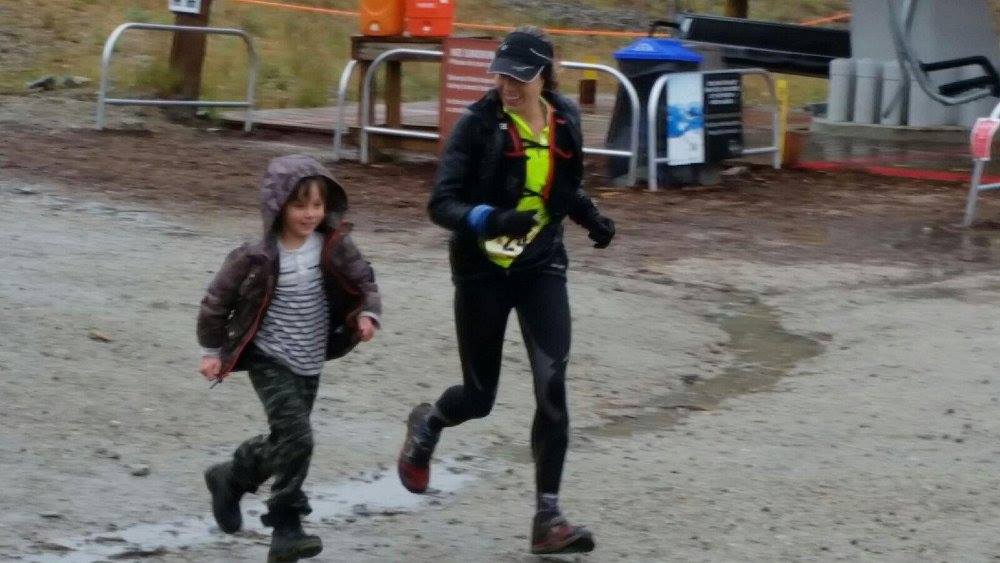 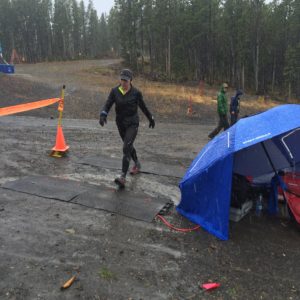 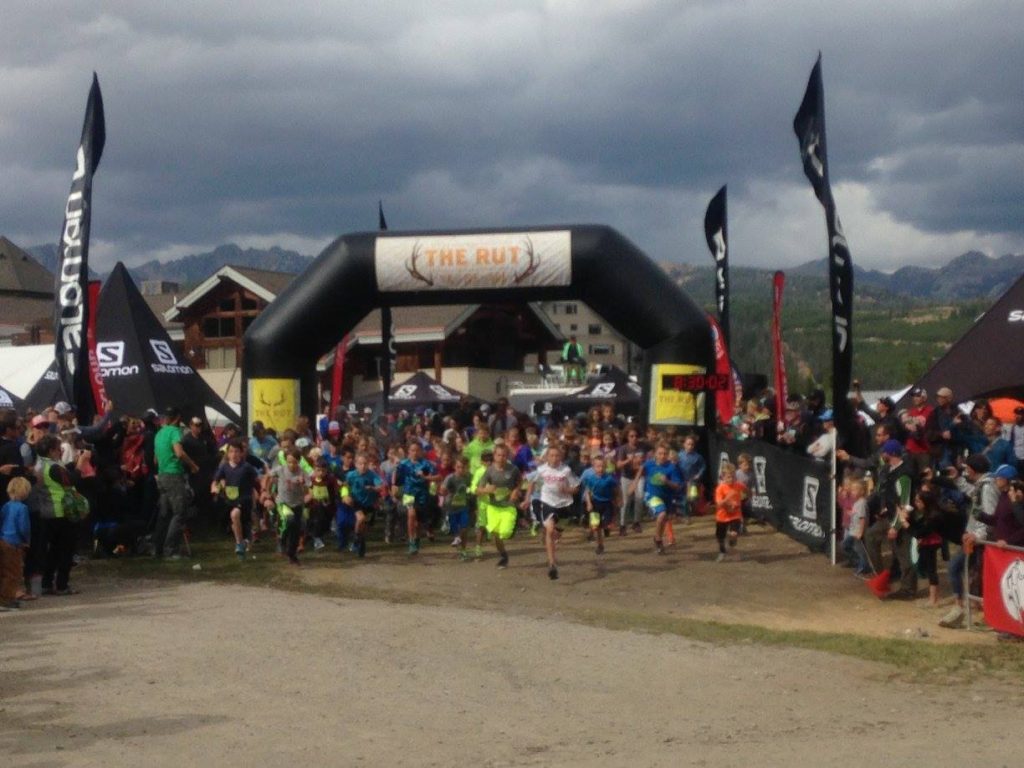 Ambassador Erik Buzzard took on the Creede Mountain Run over this last weekend. Featuring a 2, 12 & 22 mile routes, this race in the San Juan Mountains of Colorado has been going on since 1987. 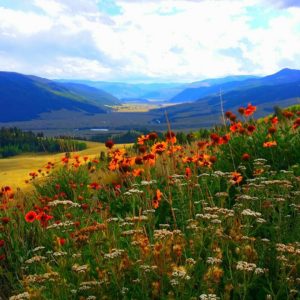 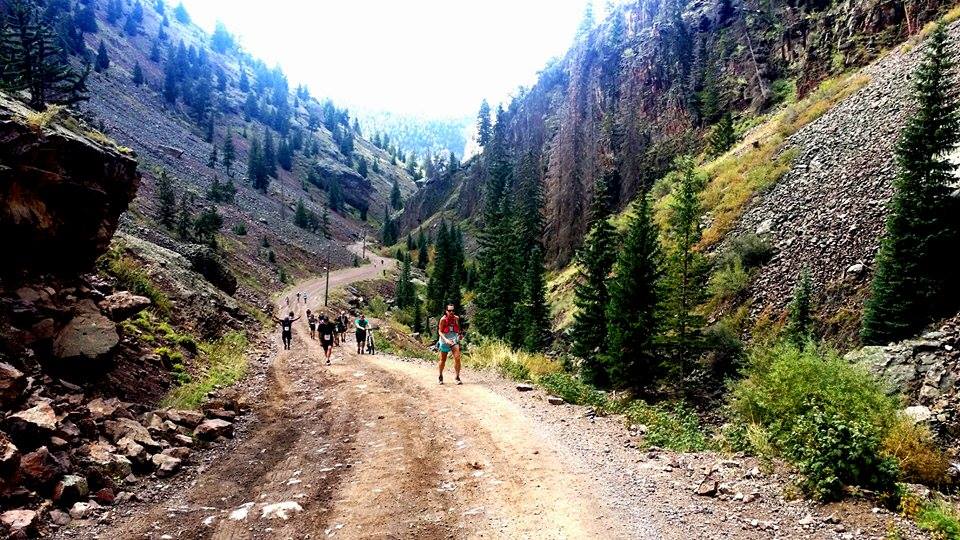 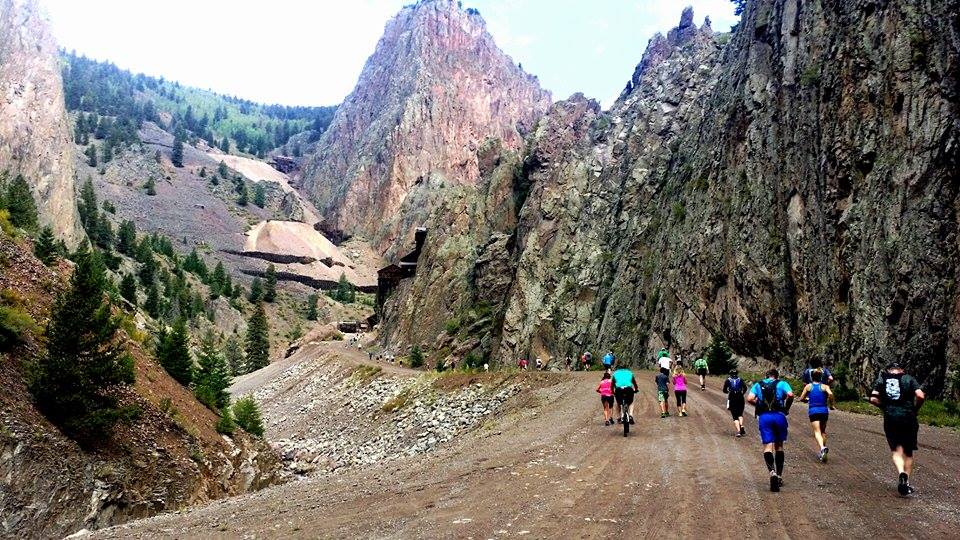 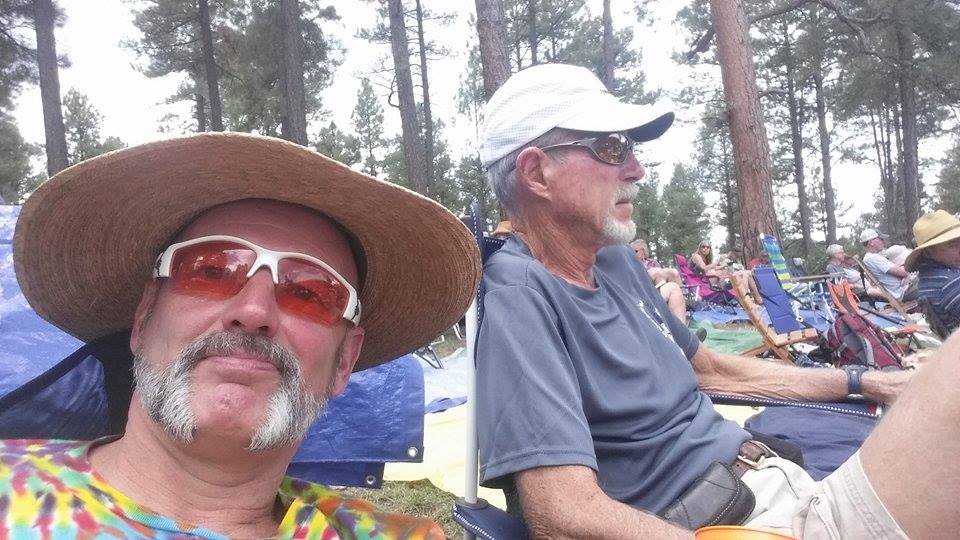 Our Arkansas Dirtbags enjoyed a nice Sunday morning outing around Lake Fayetteville with some cooler temperatures and a gorgeous sunrise! 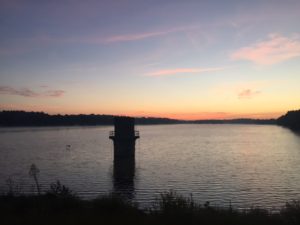 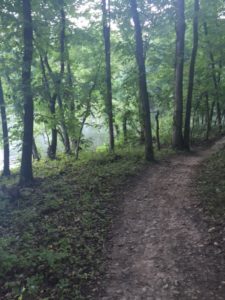 An amazing run from our Dirtbags in Canada saw Emily Compton and Ruchel Stevens complete 82 miles with 17,000′ of vertical gain through the Bow Valley and Canadian Rockies. Hear about it from Emily:

“I love maps. I could sit and look at maps every night before bed and never get bored at all the possible connections you can make right from your front door. When I say from the front door, I suppose we are extremely spoiled with the access we have living in Canmore. One night early last summer I was doing my usual post adventure beer and take over of the kitchen island with all the area maps, and it dawned on me that you could run from the house all the way to the Rockwall and complete the Rockwall almost completely on trail. The distance would be pushing 100 miles and the only pavement we had was the sunshine ski hill road.

Summer is short in the Rockies, so I figured that instead of a big race away this summer I would keep it local and run from home. I love the idea of micro adventures. Over the last year I also met Ruchel who quickly turned into one of my favorite adventure buddies or BMFF :). I floated the idea to her hoping she would be interested in at least running part of it with me and turns out she was just as stoked to do the whole route. Perfect. I also mentioned it to a friend back home who is no stranger to big days in the mountains and Mike Ehredt joined the BVGT100.

The Route: We would leave from my house in the Peaks neighborhood of canmore and run local trails to the Canmore Nordic Center. Run to the edge of the center and connect to Banff via the Rundle Riverside trail. From here we would meet our crew for the first time at Bow Falls on the edge of Banff. A bit of a tour through town got us heading down the Sundance trail, Healy creek trail to the bottom of the Sunshine ski hill access road. Here we met our crew for a second time for a quick fuel up and hoof it up the road. Another fuel up at the top of the road and then on to one of the more spectacular sections of the day Healy pass to Ball pass via Egypt lake and Whistling valley. Dropping off Ball pass we hit our last major aid area at the Floe Lake parking lot and the start of the Rockwall traverse. Rockwall would inevitably be done through the night. Our final destination for the day would be Paint Pots on highway 93.

The Day: We had secured a couple InReach devices to track our route and to connect with all our friends that had offered to come out and crew/run/cheer/push/pull us through our “Fun Run”. We left about 7am and headed towards Banff. The morning was moody, overcast, the perfect temperature for running. As long as any moisture held off, it was going to be a good day in the mountains. This was Mikes first time to the Canmore area so my fingers were crossed that we could deliver the beautiful views we get to live with every day.

We have an amazing community here in town and Ruchel and I both belong to a local trail running group, Canmore Trail Culture as well as our local speed work night with Dirtbag Runner Andy Reed. Canmore Trail Culture has become somewhat of the hub for the trail running community in Canmore over the last few years since its start in 2014 by our good friend Mike Fitzpatrick. We had so many of our friends show up to run with us and keep us motivated throughout the day, it was truly amazing seeing how many people got stoked for this route. It really was a community event. The other key part to the success of the day was Ruchel’s parents stopping in on their summer camping trip to spend the day meeting up with us and providing the mobile aid station.

BVGT 2.0 is already in the works for October. With a backyard as beautiful as ours it’s been refreshing to spend our race time hitting the micro adventures waiting for us out the back door instead.” 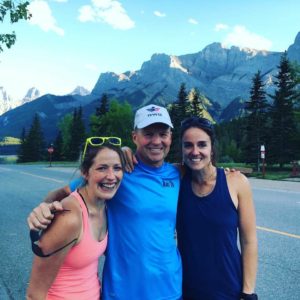 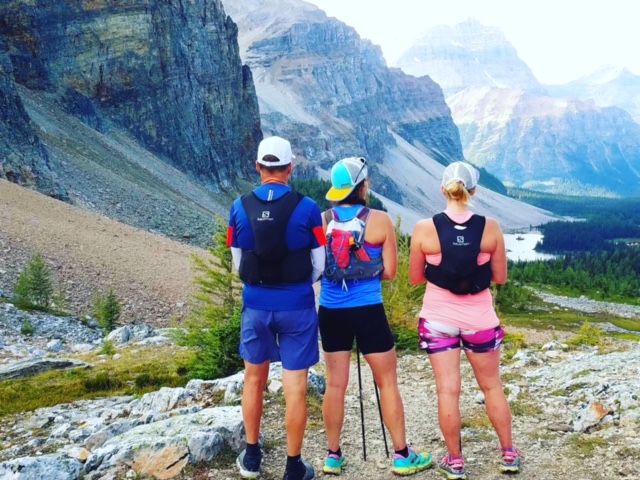 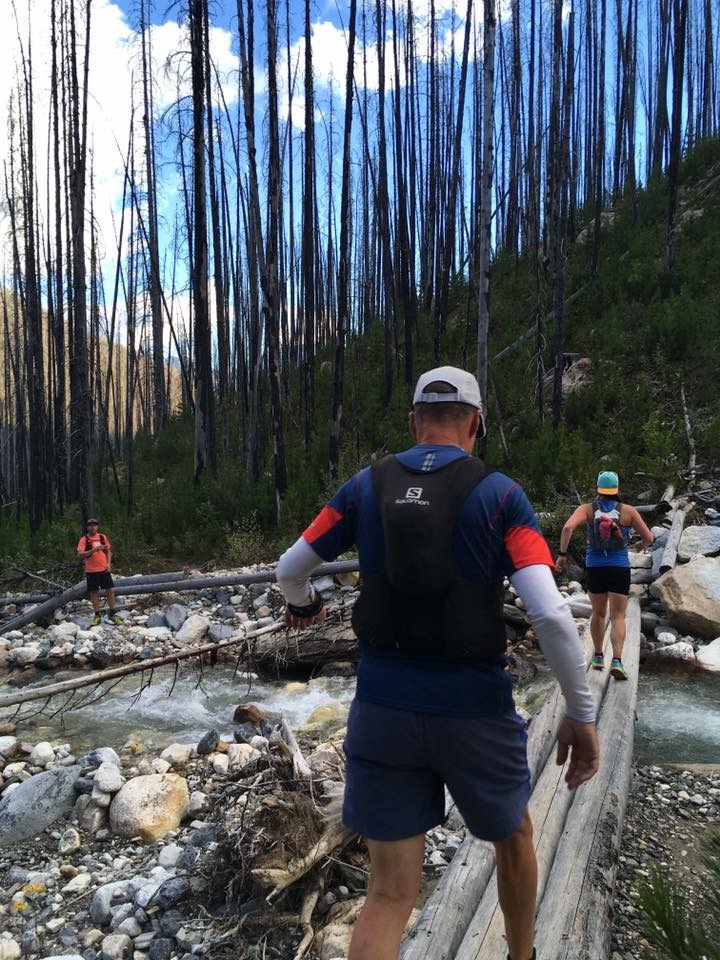 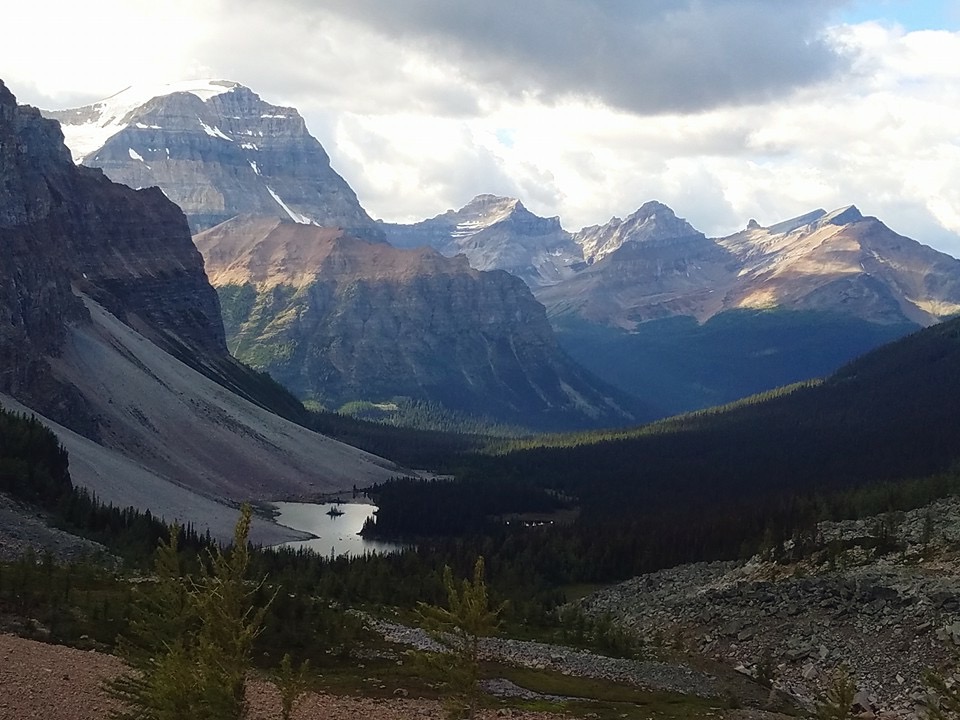 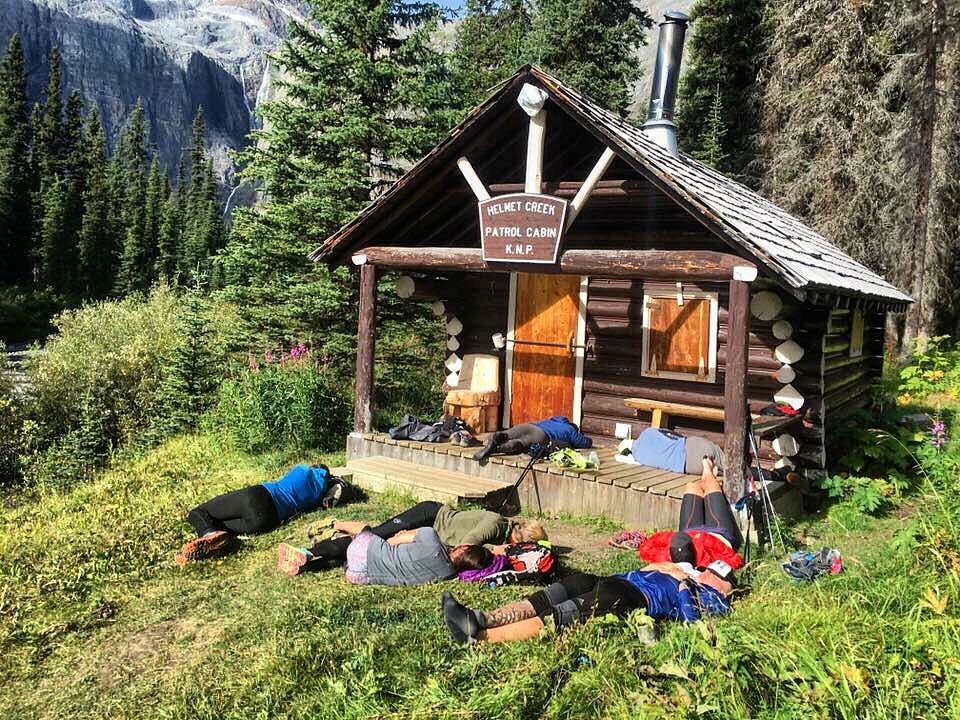 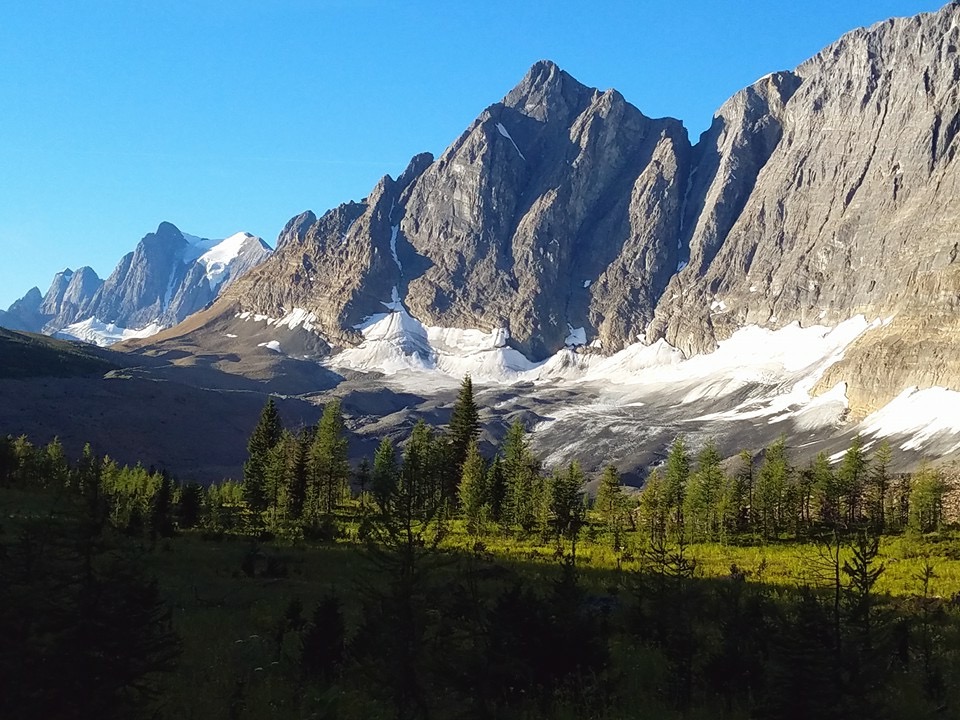 Finally, as you saw last week, many of the Dirtbag Ambassadors are fans of the newly formed sunglasses company Goodr. In case you’re interested in backing Goodr, they’re up and running on Kickstarter! 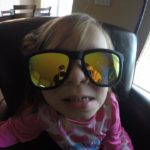 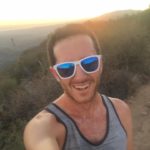 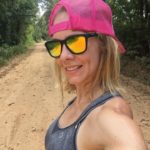 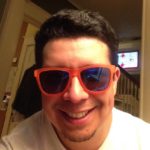 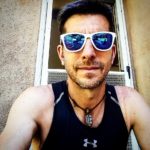 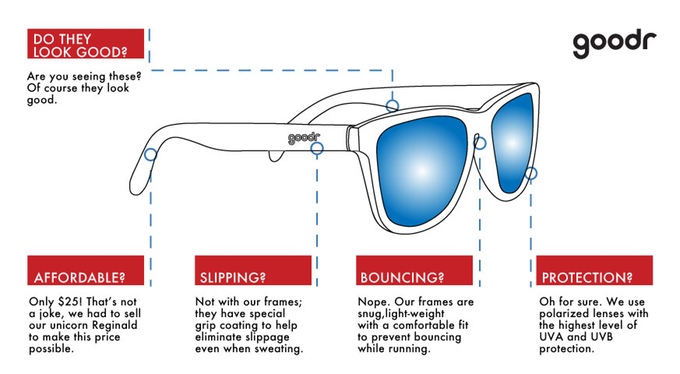 Wow, an eventful week! As always, have a great weekend exploring the trails Dirtbags!