Insights from Sunny Stroeer: Our New Favorite (and Fastest) Dirtbag

Home/Insights from Sunny Stroeer: Our New Favorite (and Fastest) Dirtbag
Previous Next

Insights from Sunny Stroeer: Our New Favorite (and Fastest) Dirtbag

I was alone. I was 1,920 miles and an international border away from home. I had, in the Bobbiest of manners, just lost my passport.

Enter Sunny: While she didn’t know of the document’s whereabouts nor the solution to my predicament, she did have a neighboring campsite, a slackline, and a matching thirst for beer.

The two of us were in middle-of-somewhere Utah, south of Moab and west of Monticello, where there was one colour and scarcely any items in sight: the red sand at our feet; the red-tinged, wind-beaten tents of fellow climbers; and the meandering red cliffs in the distance. We were in Indian Creek, heaven to crack climbers and dirtbags alike (although the two are almost synonymous; not all dirtbags are crack climbers, but crack climbers are almost always dirtbags). It is still, to this day, the most beautiful place I’ve seen.

After our initial introductions, I found out that Sunny was also living on the road. She had left her consulting job in Germany a few months earlier to pursue a life of trail running, climbing, and pushing personal boundaries. She also agreed to get me to the top of my first crack the next morning — arguably the most onerous challenge she had undertaken in the entirety of her athletic career.

We got along well, kept in touch, and a couple months later, I made my way back to Canada to see Sunny’s career follow the trajectory of an exponential growth curve. One by one her list of accomplishments grew, each one seemingly larger than that which preceded it. I watched as she took the women’s speed record (here referred to as FKT, or fastest known time) for the Aconcagua basecamp-to-summit, then for the Annapurna circuit, then the Aconcagua 360, then the Pfiffner Traverse. I watched as Power Bar, AdidasTERREX, then Mountain Hardware became sponsors; as Outside Online, Trail Runner Magazine, and Alpinist wanted to feature the woman behind the name.

She was then and continues to be, in my eyes, the definition of inspiring.

Since that day in Indian Creek two years ago, a lot has changed for both of us. Two things, however, remain the same:

Let’s hear what she had to say. 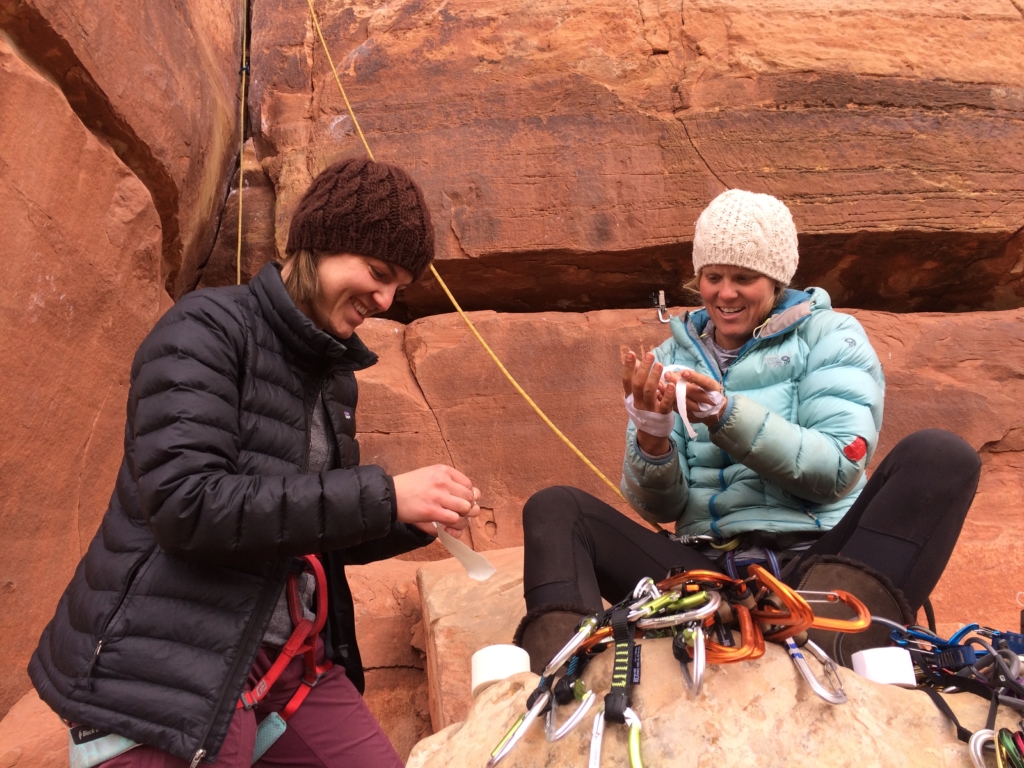 A ‘lil intro to Sunny Stroeer:

DBR. How long have you been running? What about it originally appealed to you?
SUNNY. I first started running a mile or two (or maybe three, on a good day) when I was in college. I ran not because I loved it, but because I figured it was the easiest way to be healthier and shed a few pounds.

DBR. Was it love at first step? What keeps you going back?
SUNNY. God no it wasn’t love at first step! I found running really difficult, and I did it because I felt like I needed to. I started dabbling in the half marathon and marathon distances because I wasn’t sure if I was physically capable of running that many miles, but I was curious to find out. It took an ultramarathon in Madagascar for the love to grow; up until that point I mostly just ran for the health benefits. 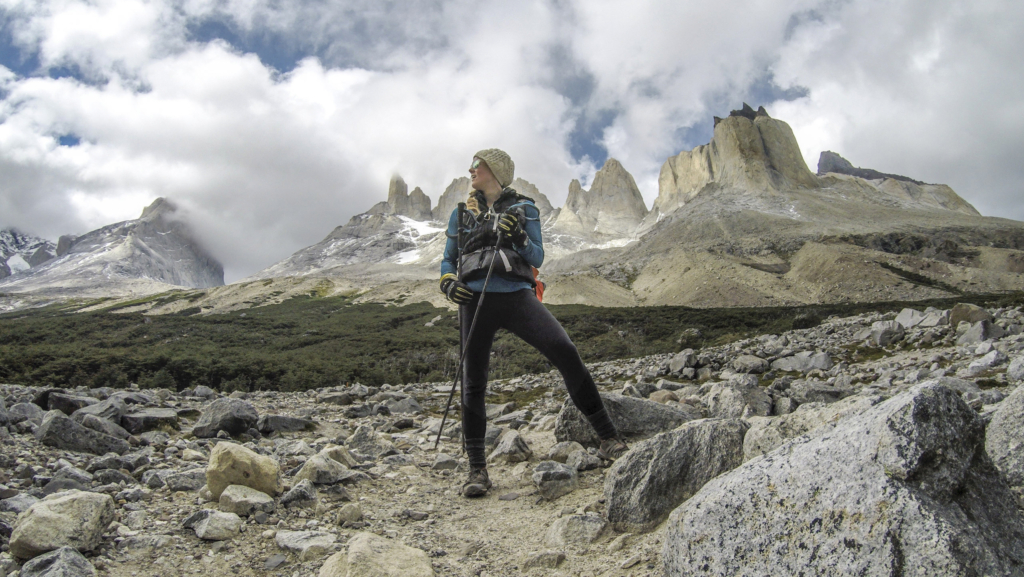 DBR. You now have four impressive FKTs behind your name. What first compelled you to go for one?
SUNNY. Curiosity. My first attempt was the Aconcagua basecamp-to-summit, and I didn’t know what it was going to feel like trying to go fast at altitude – but I was curious to find out. I really enjoy navigating the uncertainty of many different elements (altitude, weather, logistics, terrain) because I have the most fun when I am solving brand new challenges.

On the flipside, I am terrible at training in a disciplined way and I don’t enjoy focusing narrowly on just one thing, so I would get bored going through a structured training program to shave time off my marathon PR.

DBR. When attempting an FKT you’re often alone, in a remote area, and completely unsupported. That’s pretty badass. What goes into preparing for something like that?
SUNNY. A lot! First, a keen understanding of your own endurance and what you need to stay safe. It’s important to have an appreciation of the things that could go wrong and a backup plan to deal with them (for example, I carry an escape bivy with me on any longer, unsupported mission, and I have had to use it both on the Aconcagua 360 and on the Pfiffner Traverse FKT attempts).

On top of that, you have to know the route very well and be realistic in your timing strategy, given you’ll slow down a lot over time. Taking this into consideration, food and daylight should be budgeted to hit your section goals – particularly later in the push.

Attempting a mountain like Aconcagua also made things a little more complex, and so I also needed to develop a thoughtful gear strategy: it’s impossible to run with high altitude gear low down in the valley, but absolutely mandatory to have full-on expedition gear above basecamp.

DBR. Now having run both ultramarathons and FKT attempts, do you find one more challenging than the other? What would you say is the biggest difference between the two?
SUNNY. I really enjoy FKTs and journey runs. I find the strategy and self-sufficiency angles of a going after an FKT very rewarding, as you’re immersed in an adventure that you have designed yourself.

I think both races and FKTs can be incredibly challenging, and I consider the mental aspect of racing to be harder than that of an FKT. For example, in an FKT, I don’t have a lot of data points to draw from, so I end up being incredibly curious to find out what’s going to happen next. That difference alone keeps me engaged and makes the miles pass faster.

In a race, I am simply pushing as hard as I physically can until I reach the finish line, which I find a lot harder! 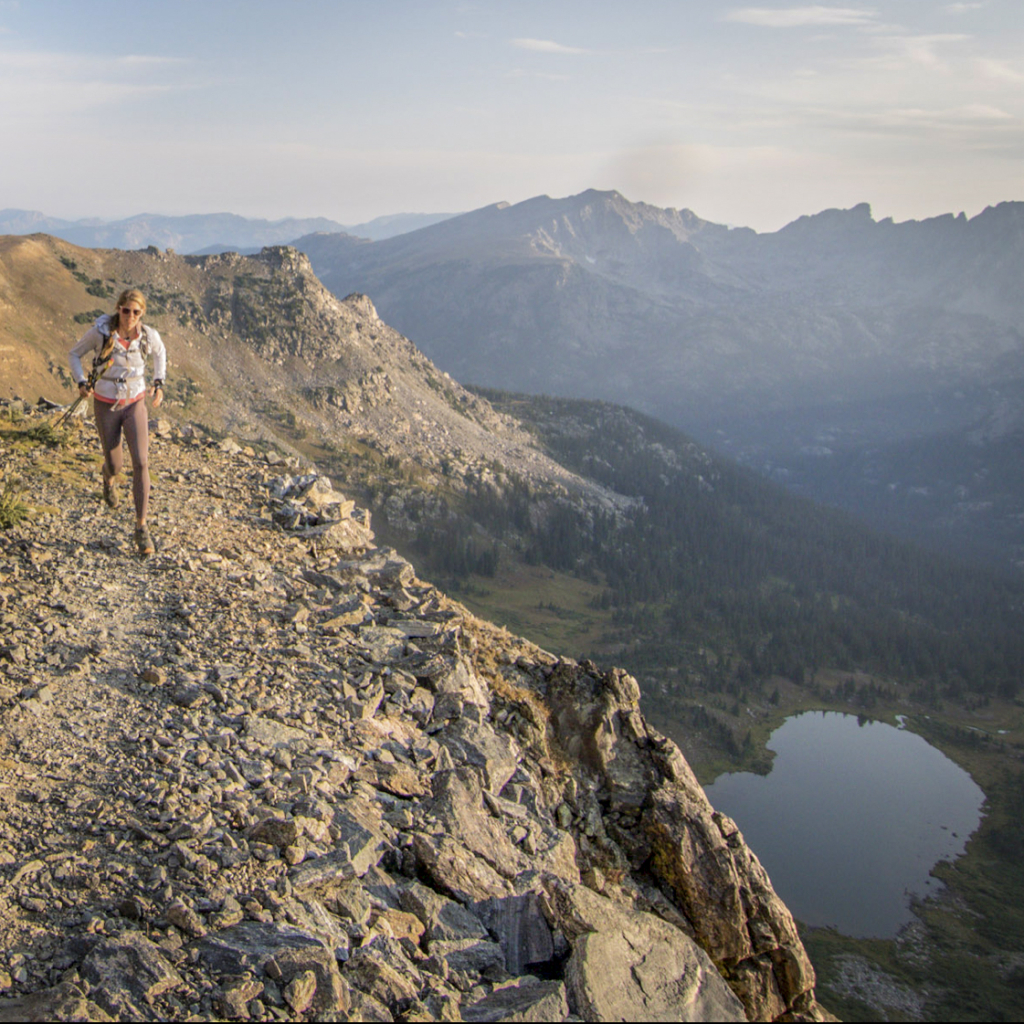 DBR: You seem to have a great success rate when it comes to breaking records. Was there a time when things didn’t go quite as planned? Were any lessons learned?
SUNNY: I have had lots of situations where things didn’t go as planned; neither Aconcagua nor the Pfiffner Traverse FKTs were achieved on my first attempt. Lessons learned:
1. Food is crucial.
2. It’ll be harder than you think.
3. That’s OK.
4. Just keep putting one foot in front of the other.

DBR. Rumor has it you don’t stick to a traditional training regime (Sunny went for the Annapurna circuit title, simply because it was there, and crushed it). Dare I ask? What’s your secret?
SUNNY. I lead a pretty active lifestyle even when I’m not working towards a big mission, and I have learned to give myself sufficient time for projects. This is particularly crucial at altitude, where it is impossible to rush acclimatization.  I have also logged lots and lots of low-effort long-duration days, which has built my cardio base for larger missions.

I am terrible at speed though! In short, I simply get outside and move (a lot, but not fast) because I love it and because I’m always curious to see what’s around the next corner.

So I guess the secret is: no training, but lots of fun!

DBR. Everyone has their own definition of success. Can you describe yours?
SUNNY. Closing the gap between who I am and who I want to be. That’s a pretty wishy-washy definition, isn’t it?

(Maybe, but one of the best ones I’ve ever heard)

DBR. And finally, what quality do you think is most important to achieve it?
SUNNY. Self-awareness and the courage to identify what makes you happy, even if it’s not something that’s conventionally considered “worthwhile” or an ingredient in the recipe for what’s commonly considered a successful life. 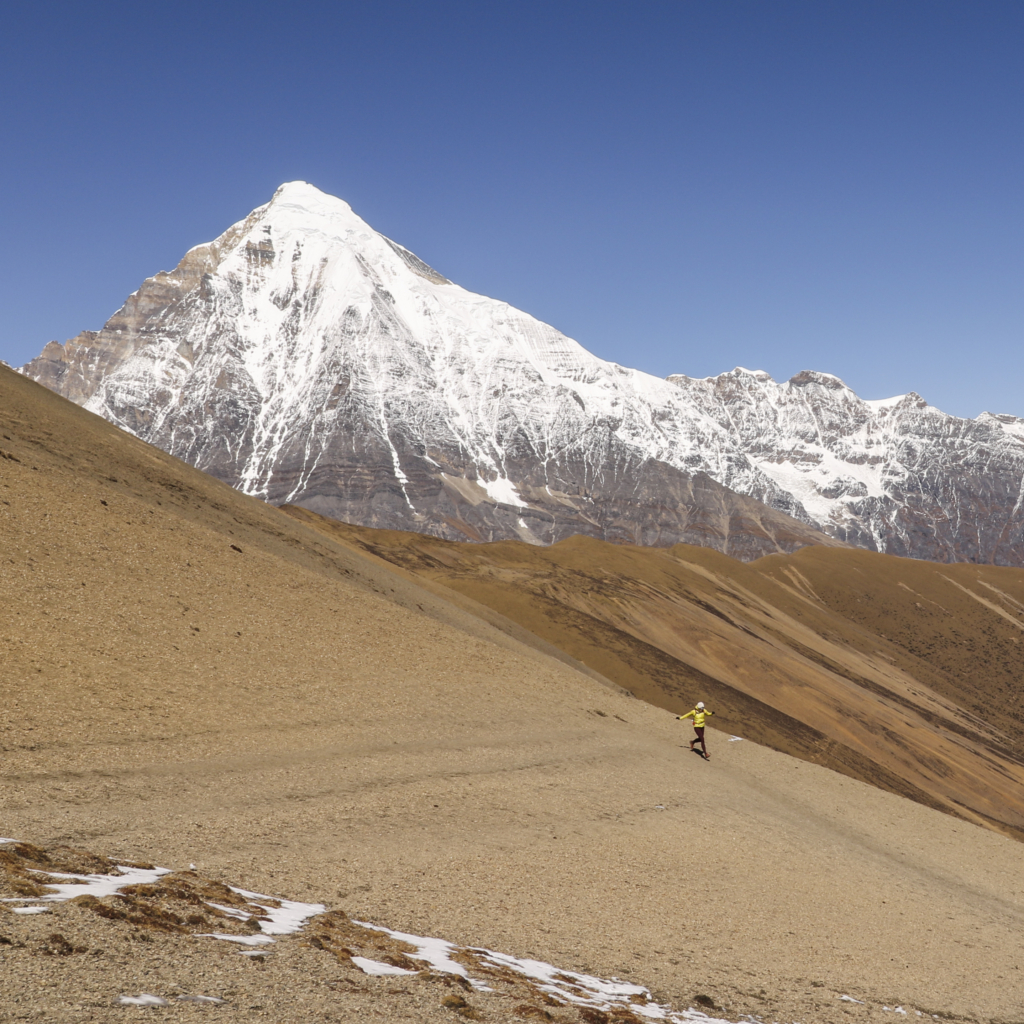 DBR. If you had one must-know trail tip to share with our runners, what would it be?
SUNNY. It’s OK to go slow. Just keep moving.

DBR. You lived the vanlife for over a year… Amazing. Can you share a favorite memory from that time?
It’s hard to whittle down so many amazing times to just one favorite. There was the time that I embarked on an eight-day solo SUP mission on Lake Powell and sank my inflatable paddle board (with my camping gear and my big camera on board, of course!).

But surely, one of my favorite moments from that entire period was January 1, 2016: it was my very first morning on the road, I wasn’t working anymore, and I had no emails to check nor a single meeting to prepare for. I had all the time in the world with no concrete plan for where I was going to go. It was a moment of complete, unfettered freedom with nothing but the open road ahead.

DBR: Any future plans? Where can we follow you next?
SUNNY. My husband Paul and I are embarking on the next big vanlife adventure to climb and run full-time for a year or two. My top endurance project for the next twelve months is to attempt Nolan’s 14 in Colorado, and I am also eyeing some more speed missions in the Himalaya.

And we’re excited to see her crush them!

To follow Sunny’s adventures, check her out on Instagram (@sstroeer) or at her personal blog at www.sunnystroeer.com/blog. 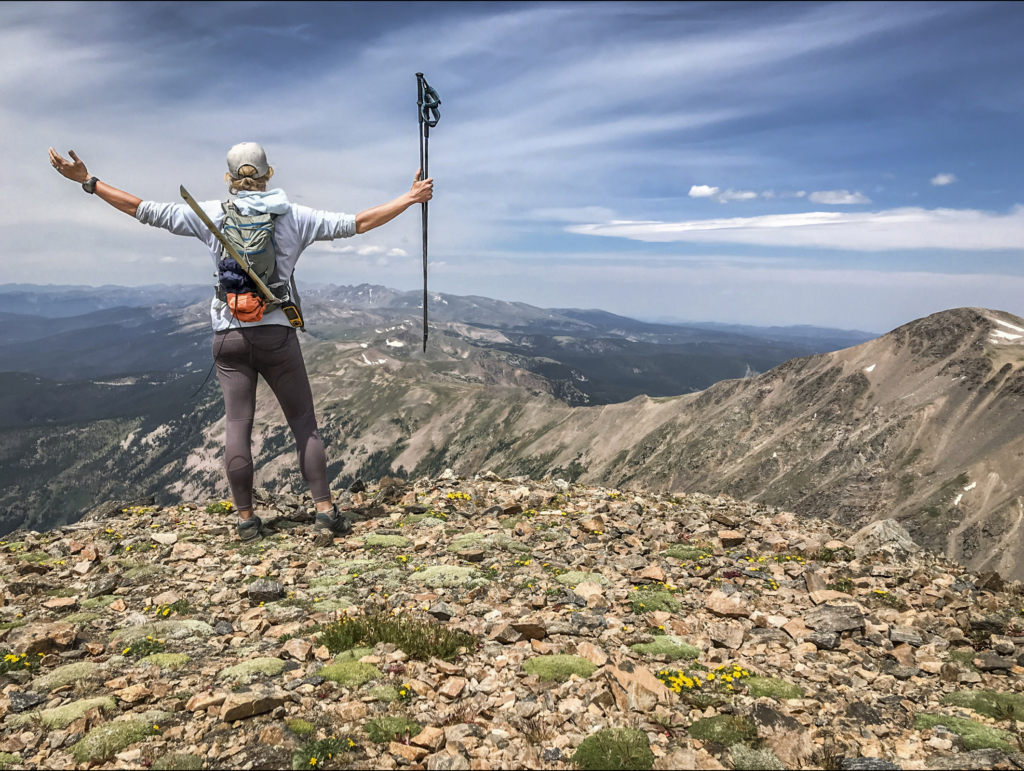 This was Bobbi’s first Q&A. Check out her other articles on the DBR Blog: A Newbie’s Guide to Ultra Registration